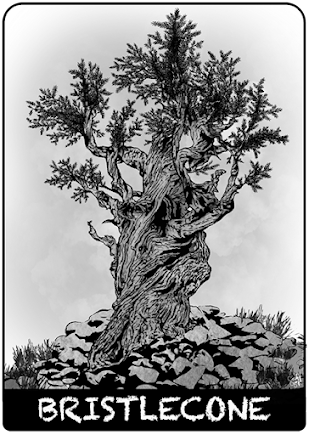 Bristlecone welcomes poems from writers of the Mountain West region. The editors are especially eager to read poems that reflect the region’s various cultures and landscapes, although we have no restrictions in mind regarding subject matter. Our main concerns are with the quality of the work and the cultivation of a regional community of poets and poetry lovers.

Submissions are accepted year-round. Please adhere to all of the following guidelines:

After publication, all rights revert to the individual Bristlecone authors. We consider simultaneous submissions but please let us know immediately if something you’ve submitted to us has been accepted elsewhere.

When my sister asks me to go to San Francisco,
I hesitate. But go.  In an outdoor café,
settled at a French iron table, a demitasse of espresso

held in his left hand, a sharpened pencil in his right,
Bob begins the lines of a love poem. He contemplates two
Japanese poets, both named Takahashi. Shinkichi’s world:

a  Zen sparrow, a serene flower,  a peach’s emotion.
Mutsuo’s an autumn darkness, a father’s longing, the hunger of a child.
Bob writes, fire engines sirening around him.

Taxi cabs blare at slow-moving cars,
a crowd of people pass in front.
Amidst this chaos, he considers Mutsuo,

whose book he accidently brought along,
and the woman he loves:
…who sleeps back in our room, beautiful
even more because it’s afternoon…

Walking uphill with my sister, I think about that first book
that made Bob the writer he wanted to be. Five years revising,
a month-long stay at McGregor’s Cabin #6,  ten essays

about West Hope, his grandfather’s loss of a grocery business,
two defeated homesteading attempts, his mother’s sadness
at her mother’s sudden death, far away from the sister

she loved. But his poet self also wrote about the Big South
he saw as Chinese landscape, Dadd Gulch, a stock trail of yellowing aspen,
the abandoned town of Manhattan, a vision of ghost gold.

My sister and I walk through the green-tiled pagoda gate
into Chinatown. Red festival lanterns swing above us.
Her young grandson is still asleep in our hotel room.

Shinkichi aside, Bob chose to write
about the woman he loved,
a woman composed primarily of sunlight.

I read both Takahashis, found next to each other
on the cabin bookshelf.  His margin notes, penciled lines,
dog-eared pages trace the clues of his mind.

I think about the man I loved,
thinking about the woman he loved,
asleep in our hotel room.

The worst thing you can imagine has already
Zipped up its coat and is heading back
Up the road to wherever it came from.

Waking up, asleep since 2 a.m.,
a small pain in my left shoulder reminds me
I am alive.

A cool breeze in my room,
the moon visible through a cracked window
of the old garage.

The dream is always the same:
I am walking alone up a road,
to wherever it came from.

on the side of a dusty road.
A small brown sign materializes,
the words are blurred.

Two photos from our first year of marriage,
appear on a table next to a bed.
In one, I am smiling next to a blooming

pink bougainvillea in Sevilla.
In another, I am a reflection
in a restaurant window in Segovia,

famous for serving roasted leg of pork.
I walk around a large pond. The goslings
have grown large. The rabbitbrush

is in full bloom. A red-winged blackbird
sits carefully on purple penstemon.
I do not breathe. I do not feel joy.

At the edge of the water, a child fishes
with her father.

Beth Franklin, poet, painter, is the Executive Director of the Colorado Poets Center. In her role as Director, Franklin coordinates and sponsors in-person and virtual poetry readings; the Robert W. King Poetry Prize, a yearly contest for the high school students in the Greeley-Evans School District 6; and publishes The Colorado Poet newsletter. She is professor emerita at the University of Northern Colorado, where she prepared pre-service teachers in Culturally and Linguistically Diverse Education. A passionate believer in the importance of poetry, Franklin is dedicated to developing and supporting local and global poetry projects. She lives in Boulder, Colorado.

At the Center of the Universe

Up in the air
7,250 feet above the sea
in New Mexico’s
Rio Arriba County
with East L.A.vato
Richard Marquez
throwing signs
on the corner of
unnamed road and
unnamed road
A baby doe appears
Richard says
“Hello little one
you’re very beautiful
I wish I had something
to give you
but I just ate my
ice cream and
I don’t think I
should give you my
chile chips
they might make you
run all night”
The doe freezes
ears alert
like she understands
Silence passes
between them
Eternity temporarily
unravels its knots
The doe turns
to leave
“Wait a minute”
Richard whispers
“Don’t leave
I have something else
to tell you”
The doe stops
turns looks
listens
Richard’s voice
tender music now
like a grandfather
talking to his grandchild
“My name is Richard
little one
remember me in the
spirit world”
The doe twitches
her ears
disappears in
the woods
Richard’s words echo
Remember me
Remember me

The Wind Has Seven Colors

Four members of the Native American Church gather wood on Skull Mountain’s south slope. They chop wood with long handle axes. Tomas, an old Taos Indian, supervises the ritual cutting of oak and elm, making sure the wood is the correct length, so everything will be just
right for the peyote ceremony.

“The mountain should not hear machines on a day like this,” Tomas says.

The mountain’s silence broken by the sound of chainsaws about fifty yards down the mountain. Tomas could see a pickup with Texas plates and two men, cutting wood, partying with their girlfriends, drinking beer.

He walks down the mountain and asks them to move to another part of the forest. “Why don’t you guys go over there,” he says, pointing to the heavily forested eastern slope. “’I’d appreciate it if you guys would move over there because we are preparing for a special time and the mountain doesn’t  like to hear machines on a day like this.”

“Go to hell, old man,” one of the women yells out.

He walks back down the mountain, picks up an axe, says, “Those people down there won’t listen. They don’t understand our ways.”

Tomas and his companions chop wood and gather wood for another hour. No chainsaw roar from below. A haunting silence.  A presence.  “The wind now has seven colors,” Tom says.

After loading the wood they get in the pickup and drive down the mountain towards Taos Pueblo. The drive past the white guys who are bent over their chainsaws. They pull the starter cords and curse, pull and curse but the chainsaws won’t start.

Tomas waves as they drive past. “You guys have a good day,” he says. Immediately the chainsaws start to run.

John  Knoll has authored six poetry books, two plays-written with Joe Speer-  a  CD, featuring John Macker and an environmental  jazz radio play, If You Rape My Mama I Will Kill You, with music by Zimbabwe En Kenya. His poems have appeared in a variety of magazines, including Beatitude and Exquisite Corpse.  He performs his poetry with jazz and rock musicians, most notably The Jack Kerouac Band, Nuclear Trout and Ground Zero.

Still. Then suddenly the herd is thundering
over plains as one whole formless cloud
that when it meets a yellow hill reticulates
to pounding hot crisscrossing trails of dust
rejoining with wild tumult at the top
where all is gone in one last smoky whorl
that spins, lifts, fades into a boundless blue.

A disappearance I’ll make someday, too.

I’ll go, go up from this dry August wash
back to the ocean sky and leave behind
this desiccating piece of earth that is
my body-shell.
But will I ever find
myself beyond that dissolution into—?

For now, I’ll take the distance of tomorrow,
the pain of waiting for a quenching rain,
and later leave this lonely, lovely field
whose antelope have fled so recently.

I Once Sat by a Sumac in the West

I once sat by a sumac in the west
insisting to exist in a remote
dry corner at the crux of four fenced fields.

It lived just past a scattered pole corral
behind an empty hay-roofed loafing shed,
its three-toothed autumn leaves had turned to red.

The memory of that ember-plant revives
in me a spirit that’s been sleeping, waking
now as daylight smolders into dusk.

Clear marble dawn will find me flying down
the windy streams of lonely backroads looking
for leaves unfurling green, refiring

the West, that masterwork enduring even
in the ramshackle middle of nowhere.

Brian Palmer was raised in the Midwest, lived for several years in the Pacific Northwest (which he still visits regularly), but has spent most of his life in various regions of Colorado, each one marvelously unique. He finds great satisfaction in writing poetry, and he’s the editor of THINK: A Journal of Poetry, Fiction, and Essays.

Dreaming of the Dead

I want to sway in a hammock
for a while,
feather clouds
with my eyelashes.

I want to accompany
the crow chorus,
blowing notes to heaven
on my flute.

I want a pageant of air
in my throat,
the dazzle
of berries
on my tongue.

I want to read reclined
in the fashion of rabbis,
turning pages I have marked
up with dots, carets,
marginalia.

I want the release
to begin in my jaw:
unleash the hinges
unfasten the tendons
unravel this body
to the morning moon,
the interminable stars,
to embryonic galaxies;
let me fill with
a wave good-bye
to the harbor.

Renée Ruderman is a recently retired English professor from Metropolitan State University of
Denver who has two published books, another forthcoming, a few prizes, numerous
publications, and a black cat.

I would stop
the beat of blood,

the brush of breath.
the thousand pebbles

of thought crunching
softly beneath these boots,

would step from the trail
and stop my living,

this lifelong blinking,
to be here

dead a time
in listening.

hears the soil
it becomes,

as the pond
beneath the geese

hears the floating feathers
once the geese have flown,

as the cloud
over the peak

hears the sky’s blue
pressing from the east.

To be here watching
with the ears of leaves

that last of me
ghost on away.

Leath Tonino is a freelance writer publishing prose and poetry in Orion, The Sun, Tricycle, High Country News, Outside, and elsewhere. He is the author of two essay collections about the outdoors, both with Trinity University Press: The Animal One Thousand Miles Long (2018) and The West Will Swallow You (2019).